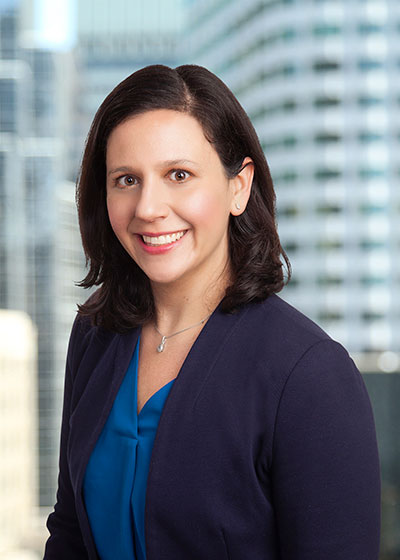 Michelle is a former federal prosecutor with an in-depth understanding of white-collar investigations.

Prior to joining the firm, Michelle was a Trial Attorney with the Department of Justice Fraud Section in Washington, DC. There, she investigated and litigated a variety of white-collar cases across the United States, including matters involving parallel investigations by the Securities and Exchange Commission and the Commodity Futures Trading Commission. Michelle was involved in all aspects of these cases, from investigation and charging to in-court litigation and resolution. Michelle’s work as a prosecutor included investigations involving allegations of investment fraud, insurance fraud, wire fraud, securities fraud and pump-and-dump schemes, and aggravated identity theft, among other things. While at the Department of Justice, Michelle served as a Special Assistant United States Attorney in the U.S. Attorney’s Office for the Eastern District of Virginia, where she litigated both misdemeanor and felony cases and successfully tried a multi-defendant combination bench and jury trial.

Michelle lectures on white-collar criminal investigations at Boston University School of Law. In addition, she sits on the Board of Directors at the Massachusetts Appleseed Center for Law & Justice. Previously, Michelle served as a Law Clerk for the Honorable George A. O’Toole, Jr. for the United States District Court for the District of Massachusetts and the Honorable Juan R. Torruella for the United States Court of Appeals for the First Circuit. Michelle graduated summa cum laude from the Boston University School of Law, where she was an Articles Editor for the Boston University Law Review and was awarded the Dr. John Ordronaux Prize for the member of the graduating class who has shown the greatest ability. She is admitted to practice in the Commonwealth of Massachusetts.

Admitted to Massachusetts and Fourth Circuit Court of Appeal