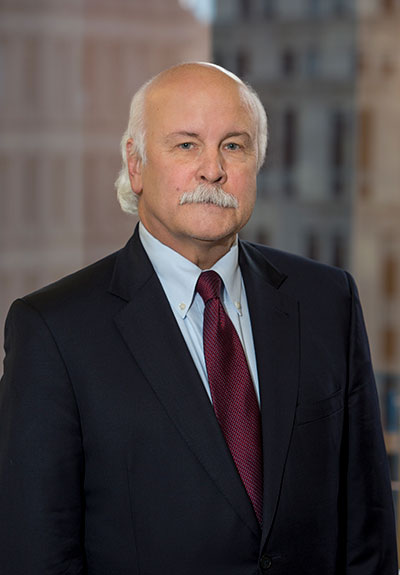 Jim Conroy, one of the firm’s cofounders, retired from the practice of law in May of 2020 to focus on his love of historical writing.

Among his memorable cases at DCG was an age discrimination claim he brought on behalf of over a hundred police officers compelled to retire after the Commonwealth of Massachusetts’s four state police forces merged. A prior decision of the First Circuit Court of Appeals seemed to authorize the move, but Jim presented a new legal theory that persuaded the court to let the case proceed, resulting in the replacement of a mandatory retirement age with a fitness-testing mandate. Jim’s favorite case was his defense of a Pearl Harbor survivor who wrote a book about the sinking of the U.S.S. Oklahoma and was sued for libel by a shipmate in his seventies. The case involved half a dozen depositions of Oklahoma survivors, a sailor’s-eye visit to its sister ship, the U.S.S. Texas, the creation of new law, and a favorable outcome.

Jim wrote three books before he left DCG. Our One Common Country: Abraham Lincoln and the Hampton Roads Peace Conference of 1860, published in 2014 by Lyons Press, was a finalist for the $50,000 Lincoln Prize for the year’s best book on Lincoln or the Civil War era. In 2017, Lincoln’s White House: The People’s House in Wartime, shared the Lincoln Prize and won the Abraham Lincoln Institute’s book award. Leading Jefferson scholars applauded Jim’s third book, Jefferson’s White House: Monticello on the Potomac, published in 2019, as an “ambitious, enlightening, and brilliantly realized project,” “colorfully written,” and “a significant contribution to Jefferson scholarship.”

Jim is now at work on a book on The Casablanca Conference of 1943, where Franklin Roosevelt, Winston Churchill, and their military high command met in secret in Morocco and planned the strategy that won World War II. The book is slated for publication by Simon & Schuster in 2022.