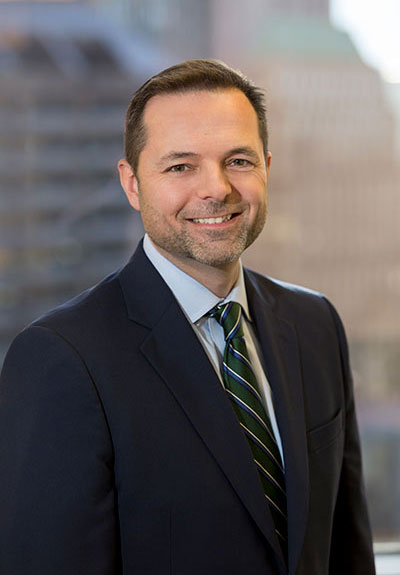 Tim Madden is a tenacious litigator who represents businesses and individuals in litigation and arbitration in various industries, including financial services, healthcare, retail, manufacturing, technology, real estate, gaming and construction. Tim also represents employers and employees in workplace disputes and defends individuals under government investigation by a range of state and federal agencies.

Tim is experienced at representing plaintiffs and defendants in a wide range of disputes that arise in the conduct of business. These include allegations of fraud, breach of contract, breach of fiduciary duty, violations of the False Claims Act, violations of RICO, defamation, employment discrimination, wrongful termination, theft of trade secrets and many other types of claims.

Many of Tim’s clients are small to middle market businesses to which any dispute is high stakes. It is likely these clients have never faced a criminal or civil complaint or investigation, and they appreciate Tim’s ability to manage their defense or assert their claims with a priority to being responsive and accessible while maintaining the desired level of communication.

Tim has particular expertise representing parties involved in disputes over the ownership and management of closely-held businesses, and has represented numerous officers and directors in disputes alleging breaches of fiduciary duty.

In addition, Tim represents both businesses and employees in workplace disputes, including those involving alleged discrimination or harassment, theft of trade secrets or confidential information, and other similar issues. Tim also advises both employers and employees on separation agreements and related issues.

In addition to his business and employment litigation experience, Tim is experienced representing clients in connection with criminal and civil government investigations, including investigations by the Department of Justice, the SEC and other securities regulators, various state Attorneys General, the Internal Revenue Service, and other civil and criminal regulators. Tim also conducts internal investigations, often involving issues related to employee misconduct, and has substantial experience handling data breaches and resulting class actions.

Tim commands 360-degree perspective of all aspects of litigation, having handled matters in state and federal trial and appellate courts and various arbitration forums. Tim previously served as a Special Assistant District Attorney in Plymouth County, Massachusetts and prior to attending law school was a police officer in Alexandria, Virginia.